Things To Do In Mandalay​ 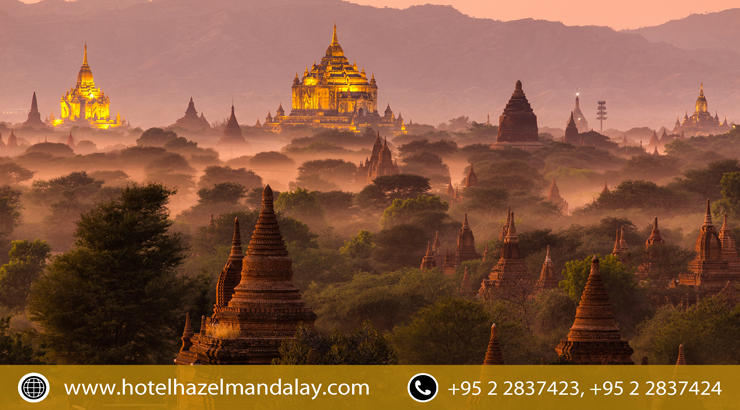 With a range of sights to see in Mandalay and its surrounds, some accessible by bicycle, others by boat, and some requiring motorised transport, we hired a private driver in Mandalay for the day to bring us to all the below things to do in Mandalay.

The U-Bein Bridge is the oldest and longest teakwood bridge in the world that was built back in 1849. The bridge is 1.2 km/0.75 miles long and used by the local people to cross Taungthaman Lake. When we were at the U-Bein Bridge for sunrise there were maybe 15 other tourists but if you come for sunset at U-Bein Bridget there will be 100’s of tourists.

Located in Mingun 11 kilometers/7 miles up the Ayeyarwady River is the Mingun Pahtodawgyi. The temple is most famous for the cracks running through it caused by an earthquake in 1839. The Mingun temple was never completed due to an astrologer claiming that if the temple was completed the king would die. Had the stupa been completed it would have been the largest in the world standing at 490 feet.

Formerly known as Ava, Myanmar’s most famous old capital city between 1365 to 1842, was abandoned in 1839 after an earthquake that leveled the city. The city was never rebuilt and the King decided to rebuild a new palace and move the government to Amarapura.

Located in the middle of the moat in the heart of Mandalay, the Mandalay Palace (Mya Nan San Kyaw Palace) was the royal palace of the last two kings of the Burmese monarchy built in 1857. In 1885, the royal family was captured and the palace no longer was a royal residence. During World War II, parts of the palace were destroyed and in the 1990’s a replica of the palace was built.

The  Shwenandaw Monastery is a gorgeous wooden monastery carved from teak wood. It was originally part of the Royal Palace in Amarpura but when the capital city moved to Mandalay so did the monastery.

Known as the World’s Largest Book, Kuthodaw Paya has 729 stupas in which each contains a marble slab with text from the Tipitaka (Buddist scriptures) inscribed.

You can climb the stairs the top of Mandalay Hill or have a taxi bring you to the top where there is an escalator to the pagoda. At the top of the hill is Sutaungpyei Pagoda with an epic panoramic view of the Mandalay.