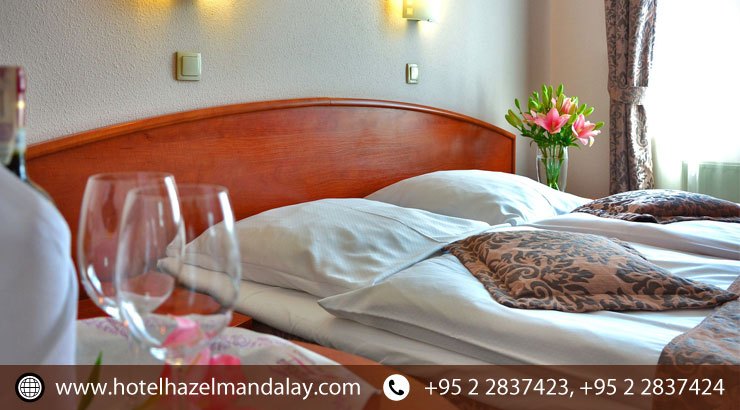 On our recent trip to Myanmar, we had a direct flight from Chiang Mai to Mandalay and spent 2 nights in Mandalay before travelling to Bagan. We didn’t expect much in Mandalay but were pleasantly surprised and glad we included Mandalay on our Myanmar itinerary.

Before you travel to Myanmar check the visa regulations for your nationality. Visa-free travel (for 14 days, or longer in some cases) is permitted for Thailand, Singapore, Vietnam, Philippines, Indonesia, Brunei, Cambodia and Laos passport holders. E-visas are currently only valid for entry at Myanmar’s three main international airports: Yangon, Mandalay and Nay Pyi Taw. We applied for the Myanmar e-visa online and were approved within 3 days.

There are hotels for every budget–from high-end luxury 5-star hotels to budget type bed & breakfast hostels–in Mandalay. We suggest staying at a hotel that is located right in the city and close to restaurants.

Getting money in Mandalay is no problem, there are ATM machines throughout the city. Every ATM machine had a maximum withdrawal limit of 300,000 MMK which is around 220 USD. In previous years there were no ATM’s and tourists had to bring new USD and exchange money in Myanmar. This is no longer needed however, we suggest bringing some cash in $USD just in case you are in a rural area without a working ATM.

If you are staying at central Mandalay hotel you can easily walk to most places. There are very few traffic signs and most intersections are uncontrolled, so be careful when walking. If you are taking the boat to Bagan from Mandalay arrange your taxi the night before.

Tourist can rent motorbikes or bicycles in Mandalay but we wouldn’t advise this due to the how chaotic the traffic is. We hired a private driver for a full day where we wanted to hit all the things to do in Mandalay.

There is a wide range of restaurants in Mandalay with something for everyone. We ate at the following restaurants during our time in Mandalay and would recommend them all. They all were tasty and it’s worth spending a few extra dollars a meal in Myanmar.

▪ Bistro on 82nd: They have small European menu with some pasta, salads, steaks, chicken, and fish dishes.

▪ NOVA Coffee: They have great coffees and smoothies as well as a big menu. Prices were also reasonable.

Wanna know where to explore in Mandalay? Read at our next blog: "Things To Do In Mandalay".